Maybe equating the end of the regular season to losing a love is a stretch, but it is to a lot of us . . .

But then on to the District championships!

That doesn’t mean that all the good games are in the record books, because they are not.

In other words, if you are looking to see a great game before playoffs begin . . . well, you really don’t have an excuse do you?

If you need one more reason, here’s a modern political version:

That might be a stretch too . . . as so many of these are

If you are in the Palm Beach area you can be excused for waiting for Saturday at noon . . .

There’s only two teams that have truly separated themselves from the rest in the regular season.  That doesn’t mean they are a lock for the FHSAA Title Game, but they have had the best regular seasons of any in the state and THEY ARE MEETING SATURDAY at noon.

I don’t ever remember this happening before.  Co #1’s Oxbridge and Ponte Vedra play for bragging rights . . . well, at least for a few more weeks . . . at Oxbridge at noon Saturday.

There was an old saying that goes “Be There . . . Or Be Square”.  Not sure if that holds up in today’s world but how any one could miss that and call themselves a fan is beyond me.

1t) Ponte Vedra – head and shoulders above everyone else

3) Saint Andrew’s – Spring break . . . the schedule sets up nicely for them to get ready

5) Bishop Moore – really coming on strong now, looks like they figured it out well.  Tough slate to end the season.

9) Creekside – how do they compete against the alpha dog?  We’ll soon find out.

11) St. Edward’s – they keep winning while others do not

There’s a space here to indicate how hard this is getting this season . . .

14t) Plant – are very close to each other

14t) Jesuit of Tampa – and I can’t choose among them

18) King’s Academy – fine against anyone not named Oxbridge

22) Hagerty – nice road win at Lake Mary, always a feather in the cap

24) SJP II – road loss to Benjamin knocks them back some

Since we had an early 1980’s song for last week, let’s go all the way to the end of the decade.  In December of 1989 one song stood at #1 for the last 3 weeks of the decade and we’ll go with that one; Phil Collins and “Another Day in Paradise”

And how appropriate.  As one who grew up on Long Island, went to college in the frozen tundra of Geneva, NY, and lived in Manhattan for 8+ years . . . anyone who thinks living in Florida isn’t paradise needs to move out . . . and when you miss this you are welcome back.

I don’t get to talk about the Girls’ side too often.  I wish I was able to get some interns interested in talking about the Girls’ game and at least there are some Twitter/Web Sites that are stepping up to help out on the coverage they deserve.

What caught our attention was a score this week that I had a hard time believing at first.

That’s worth a reprise of an earlier picture we used this year . . . Ho Lee Cow

Anyone who follows the Girls’ game in the state understands what that score means.

Congrats to Hunter Zatorsky and his team/program.  I’ll be looking forward to the early round matchup with American Heritage-Delray to see how that turns out.

And since we are talking about the Girls, let’s mention a fun college fact . . . Congrats to @amandaoleary5 and the Florida Gators for winning the regular season SEC Girls Lax crown with their victory Saturday over the Vanderbilt Commodores!

Oh wait, they play in the AAC?

Get it together SEC . . . you don’t know what you are missing!

Key Games This Past Week

Lake Mary 12-2 over Jesuit of Tampa

Underdog Upset of the Week

This really came down to 2 games, one of which I wrote about earlier this week.  The Olympic Heights win over John I Leonard really was an upset but the thought of JIL being a favorite is almost surreal to me and really nowhere near as big a win as the one that happened Friday night in St. Augustine as Menendez took down previously ranked Providence School 12-9.

Last season Providence defeated the Falcons 15-6 and there was no reason to think that wouldn’t be a similar outcome this season based on the scores each team put up so far, so congratulations to Menendez for their big win!

2nd Intermission: A 1980’s TV show scene that led to one of Hollywood’s longest relationships

For the kids today who might have watched the Back To The Future movies, they might not know that Michael J. Fox’s first real notoriety in entertainment came during the 1980’s as Alex P. Keaton, a Republican-loving character on the hit TV series Family Ties.

What makes this scene so interesting is that the young lady he meets is Tracy Pollan, also know as Mrs. Michael J. Fox, as they have been married for many years . . . a rarity in the entertainment world.  They first met shooting this episode.

For those readers who missed the story on Colin, here’s a LINK

I’ve reached out to the Viera contact I have and hope to bring you an update shortly.

Meanwhile, there is a GoFundMe page for those who can make a small contribution and here’s that:

We received some videos from games played last week and here are a few:

This week we’ll highlight another celebrity who played lacrosse at a pretty high level . . .

How many of you CNBC viewers recognize this young lady? Maybe that’s a difficult one, so here’s what she looks like now: 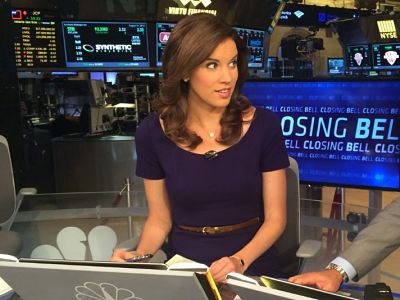 Yep, CNBC’s Kelly Evans not only played at Washington & Lee but was a PRETTY DARN GOOD player there.  Co-captain in 2007 as a senior, and she ranks 9th in W&L history for assists in a career!

If you are downtown in Boca after 6:30pm, 7 days a week, or even if you are suddenly driven by the desire to hop in your car and drive 3 hours to the location, here’s Boca’s hottest new dessert place . . . really, the only place you get FRESH, MADE TO ORDER, baked goods and sweets!  Take your date, your parents, heck, even your dog . . . they even DELIVER within a couple of miles!

Tonight’s Wrestlemania 35 and the main event is the 3-way Women’s Championship between Ronda Rousey, Charlotte Flair and Becky Lynch.

The first time the women are featured in the main event.

For those with familiarity of the business, this is more than just a male/female political correctness issue.

The main eventers of Wrestlemania are also PAID the most of any of the performers for the event and based on ticket sales and other income it would not be out of the possibility that each of the three will earn $500,000 or more for that one night’s work effort.

But the question will be whether or not the match will live up to what is usually conceded is the best Woman’s wrestling match of all time (or at least the best story told):

The epic Akira Hokuto-Shinobu Kandori match from Japan, in 1993.  So, for those who wonder, here’s that match, from April 2nd, 1993.  The event was called All Star Dreamslam.

We’ll see how tonight’s match stands up to that one . . .

And Shinobu Kandori is now a member of Japan’s House of Councillors, their version of our U.S. Senate . . . making her maybe the highest ranking female politician ever to come from the wrestling ring.

And a bonus trivia piece . . . how many of you remember Mick Foley / Cactus Jack / Mankind was a starting goalie for Ward Melville and was recruited to Cortland State to play the position?

5) Bishop Moore – will be fun and revealing

6) Benjamin – they must learn to finish better

8) Jupiter – offensive struggles are being corrected

9) American Heritage-Plantation – not letting up on the schedule this week at all.  Benjamin game huge for where they truly are.

13) Riverview-Sarasota – they will face Berkeley this week

15) Newsome – Jesuit is the final test

17) Plant – needs to stop the bleeding

20t) Lake Mary – looks like they are getting it together at the right time, but likely can;t handle the best teams.  Great schedule gets them respect . . . something a lot of other teams below them need to learn

23) Boca Raton – wins over Stoneman Douglas and Western . . . rapidly improving.  Threw away a game against Columbus they fully controlled.