I just wrote a story about statement games and that also was the underlying story of last night’s game, albeit at a higher level.  When I prepared the preseason polls I placed both of these teams at #5 in Class 1A and indicated they’d settle the question for now in the first week.  It was one of those things where you wonder if you are jumping the gun a little given they had some great efforts last year against top teams but had not yet put one in the ‘W’ column.  With the wire to wire 10-6 victory last night King’s Academy took that step up to elite status in the state.  Benjamin is one of the most consistent programs in Florida for many years and a win over them is never an easy task. 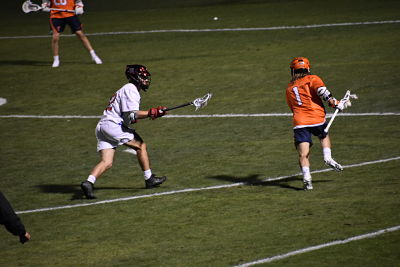 It was an impressive performance on all sides of the game, with the exception of some turnovers that came from trying to do too much at times but the offense was pretty much patient and effective, and grew better as the game wore on.  Both teams played a patient game against two very solid defenses and two high-end goalies, but King’s played it better last night.  Part of that was the difficult conditions that South Florida teams usually don’t face, with a steady wind cutting from goal to goal and a misty rain that made the grass field slicker than a heavier rain would have.  And COLD for the area, as those who watched the after-game interview with King’s HC Jacob Webb would notice.  There were actually times where the misty rain did not reach the ground because the wind carried it over . . . a fascinating visual for the large crowd.  And it was a large crowd as both teams were represented well.

King’s played a remarkable defensive game as each Benjamin score was well earned and ground out.  None were in transition as the King’s middies took away odd man opportunities and the long poles were very difficult to beat one on one.  A great matchup with King’s Jacob Webb (Jr.? 2nd?  heck, just a terrific defender) and Benjamin’s Trevor Natalie, who managed to score the goal of the game in the 4th and 2 overall.  Game within the game if you like that.  And I do.  Benjamin rode well in the 1st half and turned King’s over 3 consecutive times but in the end it came down to one simple thing.  King’s made more plays and Benjamin didn’t really have an answer for Chris Ernestine, who potted 5 goals in many ways.   He’s a difference maker right now. 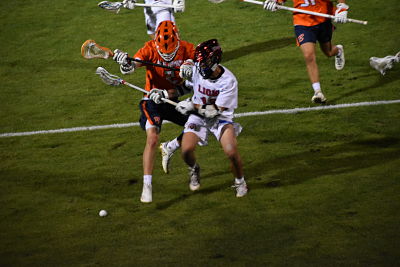 The game opened with a tight defense on both sides and both goalies saw the ball well and it wasn’t until 4:37 left that Ernestine broke through, on the EMO as Trace Hogan found him alone on the crease from top left for the putaway.  A little over a minute later it was Natalie on EMO (I don’t have the assist) as he stepped in on the right wing for the left hand shot mid high to make it 1-1 after the first.

12 seconds into the 2nd Ernestine beat his defender down the right side and got to the front to put the ball away for the 2-1 lead.  Two minutes later it was 3-1 as Ernestine found Hogan with the skip pass from behind right to top left and Hogan fired a screened shot to the top right corner.  At 4:08 it went to 4-1 as Ernestine drove right alley, reversed back up and used the defender as a screen to nail the low left corner.  Joey Berg got one back with 2:01 left in the half as he worked a two-man with Luke Pisani and Berg was able to go down the right alley for the low right hand shot, with King’s goalie Tommy Null got a piece of but couldn’t stop and that was the half. 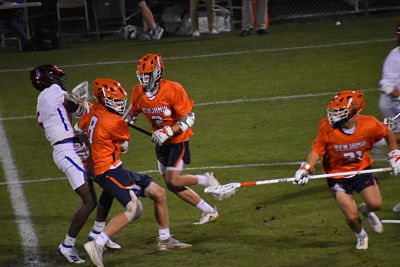 The Bucs got within one at 9:10 in the 3rd on a delayed call as AJ Stratton took a Brady Quinn left wing feed in the middle and went left hand low right for 4-3.  At 6:24 it was Coby Mcdonald making it a 2-goal lead as Aiden Collier went down right alley and reversed it to Mcdonald for the step down that Benjamin goalie Bryce Kendrigan got a piece of, but it eluded him.  Collier then went down the right alley and hit the top corner for 6-3 at 3:16.  Berg got that one back with 1:31 left for 6-4 as Quinn found him from left GLE low on the alley for the low shot and that’s how we went to the 4th. 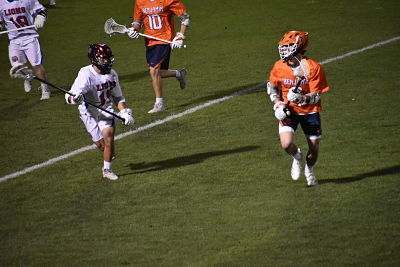 The teams traded early goals as Ernestine scored on EMO after Hogan found him top right from top left and Ernestine lasered it to the low short side but only 16 seconds later AJ Levitt took a quick restart on the left wing and beat his defender to the cage for 7-4.  King’s then broke it open  with two goals in 5 seconds just afterwards.  The faceoff found Ernestine and he split the defense to finish left hand low and Michael Smith popped the next one forward and found Aidan Aitken on the left wing for a step down to the right side and all of a sudden it was 9-5 only 90 seconds into the quarter.  Hogan stretched it to 10-5 at 8:22 on a stop and start down the right alley and Natalie managed to fend off two long poles down low to finish the scoring at 4:09.

And that wonderful word ‘Parity’ continues to spread throughout the state . . .

Coby Mcdonald and Aidan Aitken  with 1G each

Trevor Natalie and Joey Berg with 2G each

AJ Stratton and AJ levitt with 1G each

Thanks to Coach Webb and Coach Cordrey for talking to me before and after the game.