The musical group Supertramp was known for the song Take The Long Way Home.  The Saint Andrew’s and Jupiter coaching staffs might well take the Long Poles home . . . feed them a nice meal . . . and tuck them into bed after last night’s game.  Defense sometimes wins championships.  Last night you saw the blueprint of how it happens in lacrosse.

What many might have thought was a bit of a sloppy game (and there were enough unforced errors to make that case) was really an example of how full field intensity plays out.  Clearing was an adventure; almost no clears went uncontested.  It was a pretty rare game to me in that a LOT of the play was in between the boxes.  A lot of games might be won there but the time of possession for that area tends to be low.  Last night was an exception.  And where it showed the most was that SA won the groundball battle in that area for most of the game and it wasn’t until Jupiter started to swing that battle that they caught up later.

That flowed through to the shot differential.  Jupiter’s offense did not get a lot of shots off.  19 attempts and 12 hit the cage, versus 30 and 17 for SA.  And that was with SA having to kill off more penalties.  Both offenses had a lot of trouble breaking down their defenders.  SA’s Michael Lizzio was able to do it, but in two of those instances it took a screen to isolate a short pole on him, which he took advantage of.  Jupiter’s offense relied more on the EMO and a couple of their own dodges.  Very few opportunities came against a long pole on either side.  But that also extended beyond defending.  3 of the 13 goals were scored by long poles, with the 2 SA goals coming off beating their defenders to the goal and Jupiter’s as a result of winning the wing battle on the faceoff. 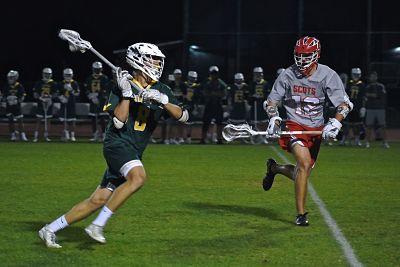 The goalies on both sides played well but they were also part of the difficulties on the clearing game as outlet passes had to be completely accurate to be effective.  One final statistic on this was that according to my tallies, total turnovers for the 2 teams actually exceeded total shots on goal 30-29.  Very rare for these two programs.

The fact these two schools are now in different classes means they will not meet again this season.  Which leads to an interesting question . . . with a few districts being weak will we see more of what Jupiter and Benjamin are doing this year?  They decided to play a home and home series since they no longer meet in the district or playoffs.  Will other schools follow that lead?  Imagine home and home for SA and STA?  Gulliver and Belen?  Bishop Moore and LHP (they are in the same district so that one isn’t necessary but would still be fun to contemplate)?  Many former rivalries around the state are now separated by class and district; could we hope to see some of this happen in the future?  Could be an interesting way to build further fan interest in the sport. 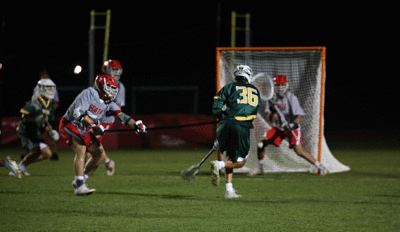 The first quarter produced one goal and it came in the last minute on EMO, as Max Sanderson scored after a wheeling passing play, taking the Tyler Douglass feed from up top on the right wing for the low left hand shot at 0:31.

SA’s Kurt Schwarz responded quickly to tie it up at 11:14, as Will Adams found him cutting to the front of the crease from the top left and Schwarz finished low.  Louie Adams followed that by winning the loose ball near the faceoff line and dashing down the left alley before finishing with a right hand low shot at 9:20.  Lizzio then went down the right alley after getting a screen top left, finishing low left with 7:16 to go.  Sean Jordan then replicated Adams’ play on the right wing at 4:17 to make it 4-1, getting all the way to the right crease for the finish.

Jupiter responded twice in 13 seconds to make it 4-3 at the half.  Miles Jones took the Chris Radice feed from behind left on the wing for the step down bullet that snuck through Gunnar Schwarz (both SA goalies played equally, with Jake Knowles in for the 1srt and 3rd, while Schwarz played the 2nd and 4th; Aidan Vincent went the whole way for Jupiter) for 4-2 at 1:48.  Reef Kabalin then scooped up the loose ball off the faceoff struggle and went down the middle and hit the top right corner from distance to close the half. 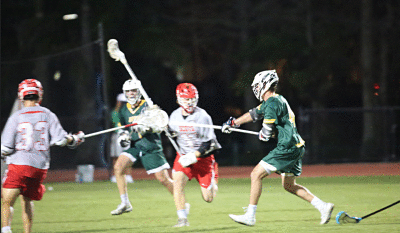 Lizzio opened it back up to 5-3 unassisted as he again was able to get isolated on the short pole and again went right alley for the shot that hit the low left corner at 9:22.  At 4:12 Jupiter cut it back to one as Radice found Sanderson from behind on the right wing for a left hand low shot and with only 7 seconds left Sanderson face dodged from top right to the middle and hit the bounce shot to the left to send it to the 4th tied at 5.

SA jumped out quickly with 2 goals in the first two minutes of the 4th.  Reid Malkin gutted out a shot on low left between defenders, hitting the low right at 10:57 and at 10:01 it was Lizzio again hitting the low left after getting the step on his defender for 7-5.  With 3:47 to go Jupiter cut it to one on the EMO, with Jones feeding Sanderson on the right side for the left hand but that was it as Sanderson’s late isolation was not able to get off a hard shot and the Schwarz save sealed the deal.

Maybe home and home is a pretty good idea, if we could have a late season replay . . . 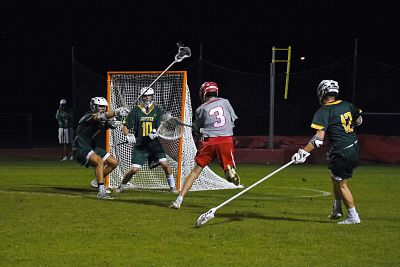 Thanks to Coach Seaman and Coach O’Hara for talking to me before and after the game.