It’s on to Saturday night for the Sharks and the Raiders.  One looked to get there from Day One and glided through their pathway until having to grind it out yesterday while the other was not expected to get here but found a way to win 2 OT games on their path, including yesterday’s solo dash through traffic.  And you saw two very different games yesterday.

The prediction from the preview article still holds, and I think you will see a similar game to the PV-Jupiter game as STA can also dominate the faceoffs and that plays into what is called a ‘slugger’s chance’.  But I’m sticking with it.  I picked PV to beat Oxbridge in the Preseason Top 25, picked them in the Final Four preview, and I’m sticking with them to win their first title.

Ponte Vedra Holds Off Jupiter Rally for the 10-8 Win

This was a two-part story, the first being Ponte Vedra getting off to an extraordinary start through the first 20 minutes of the game, getting out to a 7-1 lead and the second part, where Jupiter chipped and chipped but just barely missed breaking through the wall they had to climb.

And in one way it was almost a Warrior game within the game as the two teams shot similar numbers, but Jupiter ended up wasting a 15-5 faceoff advantage, mostly from Dylan Frankhouser, and a 6-0 penalty advantage by turning the ball over 8 more times than PV.  Maybe wasting the penalty advantage is a little unfair, as they were perfect on the EMO in the 2nd half comeback, scoring four goals on 3 chances (an un-releasable penalty on Max Schalit was cashed in twice).  It was a major factor in the comeback.

PV led 4-0 after the first as Carter Parlette took control early for the Sharks, with 2G/1A in the frame, both goals on a similar low right spin and finding space top left with a deceptive delivery.  Joe Taraboletti opened the scoring after maneuvering inside and Jack Dowd added a step down. 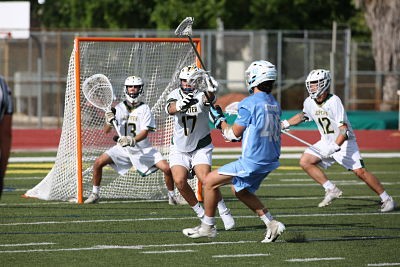 In the second Dowd took the Hess feed on EMO for 5-0 before Jupiter finally got on the board as Trevor Sousa finished the fast break in front off the JC Houchin feed.  Schalit fired a rocket from over 15 yards to the top left for 6-1 and Hess took advantage of the quick restart from behind right to beat the defender to goal for the 7-1 lead but PV got a little sloppy (or cute if you prefer) and missed a few opportunities that might have broken it beyond comeback range but that gave Jupiter time to get some offense going and goals by Miles Jones, unassisted, and Chris Radice from Sousa on EMO, cut it to 7-3 at the half and momentum had started to swing.

Memories of the 3nd half last year for PV needed to be fought off and when Parlette took the Hess feed early in the 3rd for 8-3 it looked good, but then the Warriors potted 3 straight in less than 3 minutes, all on EMO, to make it a two-goal game. Max Sanderson rebounded his own shot and the goalie, Noah Parlette, gambled on the ground ball, giving Sanderson the open net.  Then Sousa found Jack Lambert for the step down and Tyler Douglass finished off a lengthy dodge on a Riley Quinn outlet pass with the bounce shot.  Hess and Charles Hirsch traded goals and it went to the fourth at 9-7. 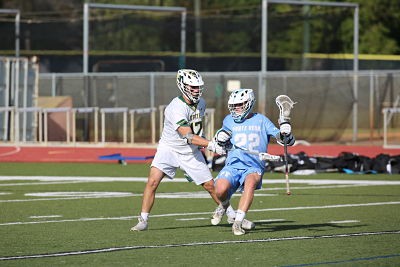 Another EMO for Jupiter finally got them within one early in the fourth as Sanderson finished the Sousa feed on the right wing but after a number of possessions it was Taraboletti sneaking into the middle and Hess found him in front from behind the net for the two-goal lead and PV’s only faceoff win of the half was after that one, allowing PV to run clock and eventually salt away the game.

Parlette led PV with 3G/1A, Hess with 2G/3A and Dowd and Taraboletti with 2G each.  Max Sanderson went 2G/1A and Sousa with 1G/3A to lead the Warriors.  Both teams recorded 5 saves.

A more fast-paced, higher-scoring and turnover filled game in this one as each team wanted to get out quick, and that helped each team and hurt each.  Some of those turnovers were deep in their own defensive half and a few led to easy goals for the offenses.  Since I didn’t get to see Bishop Moore this year, I didn’t appreciate the all-around play of their long poles, who were free to join the offense and very effective at doing it.  Sr. Justin Pridgen was a revelation and Jackson Canfield was nearly unbeatable one on one when isolated.  Brock Gonzalez scored 4G for STA, including the late EMO game-tying goal but all four were off ball cuts as he did not have any success when carrying the ball against Canfield.  It really was a very interesting game within the game to watch Canfield and Gonzalez utilizing their strengths and adjust on the fly to complete their appointed rounds.

Matthew Church stepped up early for STA to get them going and Lucas Gauch answered the bell when needed late in the game.  Jared Chenoy provided the faceoff advantage as expected (22/29 overall for STA) but both goalies were strong in the middle of the game to keep either team from pulling away. 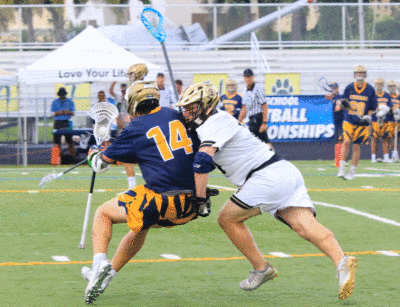 This game had three plots to it, BM’s first quarter, STA’s second quarter and the fourth quarter slugfest, leading to another state semifinal OT thriller.

BM got out early and often in the first.  Pridgen opened it up in front off a save.  RJ Sanfilippo took the Jake Kiefer feed on the low left to finish a fast break, Jack Greeno popping forward a faceoff and bouncing one home, and finally Keifer rocketing one to the top left off the Pridgen fast break feed for 4-0.  Nick Yovino broke the ice for STA off a left wing wormburner but Kiefer and Brooks Rask made it 6-1, with both the result of STA turnovers.  Church then finished off the Grant Laman feed in front to end the first at 6-2 BM.

20 seconds into the second it was already 6-4 as twice the faceoff was popped forward and Gonzalez took advantage twice.  The second one was really interesting as his first attempt from the right wing sailed the cage but Church caught it and Gonzalez moved to the middle instead of behind the net and Church found him with just enough room to finish.  A minute later it was Church taking the Yovino feed for 6-5.  At 7:50 it was Gonzalez tying it up off the back door cut, taking the Laman feed and at 3:49 they took their first lead on the Laman spin dodge.  But with less than a minute to go it was Pridgen with a stunning short-handed effort, with a 60-yard dash and low shot to make it 7-7 at the half. 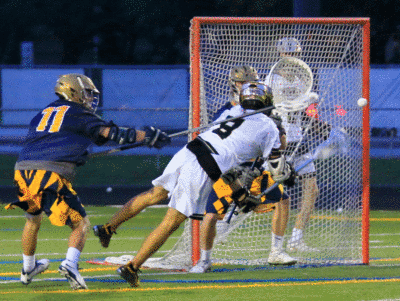 BM scored the only 2 goals of the 3rd for the 9-7 lead as Justin Mulligan took the Brett Heneghan feed for the step down and Sanfilippo curled from behind right for the low shot.

The fourth started with a Rask goal at 9:15, finishing the fast break off the Heneghen feed and a 10-7 lead.  Kyle Engel got that one back 29 seconds later as he got to the goal via GLE but Sanfilippo put it back to 3 at 7:48 off the crease feed from Mulligan and it was looking like the Hornets were going back to the finals.

But in less than two minutes STA initiated a stunning rally to tie it up at 11.  Laman finishing the Jacob Urbano feed on the top right, Gauch ripping home from the top middle at 5:35 and then 6 seconds later Gauch annihilated a flat-footed rocket to the top left from distance to set up the final stage.

Rask put BM ahead with 3:04 left as two STA players ran into each other and Rask took the opportunity to nail the top right corner.  BM’s second penalty of the game came at the wrong time and Gonzalez sent it to OT off the crease cut and one-timer with 33 seconds left. 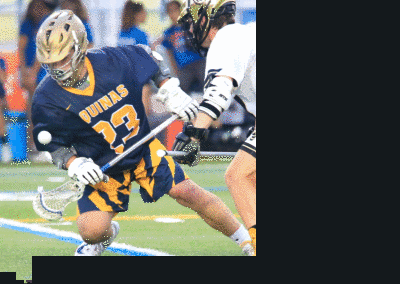 In the OT each team had one possession and on BM’s Kiefer isolated behind the right side of the net and he beat the defender to the net but Fr. Wade Lamon made the biggest save of his young life and STA took their time to set up.  Engel got possession outside the box on the left and he managed to weave through half the defense and power inside, finally getting off the low left shot that sealed the deal for the Raiders.

Gonzalez with 4G, Laman with 2G/3A, Church with 2G/1A, Yovino with 1G/2A and Engel and Gauch with 2G each led the STA offense.  Lamon chipped in with 13 saves.  BM was led by Sanfilippo with 3G/1A, Rask with 3G and Pridgen and Kiefer with 2G/1A each.  Davison Oser played a terrific game in goal with 11 saves.

What a game and what a day.  And we get one more bite of the apple tonight at 8:00pm!