A New League Experience for Players and Fans Will Begin on Friday, May 31, 2019 With Two Matchups

The 2019 schedule includes many changes advocated for by the league’s players, including a season start date after Memorial Day and an emphasis on playing weekend games. In addition, each team will play each other twice, the first time that has occurred since 2015, before the league expansion to include the Atlanta Blaze.

In conjunction with its schedule announcement, MLL will continue its partnerships with both ESPN and Lax Sports Network (LSN) to bring games to screens across the country. ESPN, via its ESPN+ service, will feature a Game of the Week. The league’s All-Star Game, taking place July 27, will be broadcast on ESPN2, while the Championship on September 29, will be shown on ESPNEWS. The All-Star game will be played in Navy-Marine Corps Memorial Stadium on July 27th. Championship Weekend will be September 27th – 29th and the location will be announced at a later date.

“This schedule is the result of input from our players, coaches, GMs and team presidents,” said Alexander Brown, MLL Commissioner. “It reflects our commitment to consistently improve the experience for our fans, our players, and our teams. The schedule highlights the best rivalries in the game and features a great lineup for our broadcast partners.”

In addition to the Outlaws-Lizards match, MLL opening weekend will see the Atlanta Blaze traveling to face their Southern rivals the Florida Launch on Friday, May 31. On Saturday, June 1, the 2017 champion Ohio Machine travel to face the Boston Cannons, one of the league’s original franchises. Closing out the opening slate on Sunday, June 2, the Blaze will face the Chesapeake Bayhawks and the Dallas Rattlers will host the Charlotte Hounds.

The 2019 schedule features 58 weekend games and only 14 weekday games, something players and fans alike called for. In addition, the league took player input into account in limiting doubleheader weekends.

“As I enter into my 11th season playing in Major League Lacrosse, I can confidently say that this new schedule will offer the greatest experience for the player,” said Bayhawks midfielder Matt Abbott, a 10-year veteran of the league. “Starting the season after Memorial Day allows us to get all of our rookies in from day 1, cutting back on weekday games makes it easier for players to travel and the additional games added to the season gives us more opportunities to get out in front of the fans.”

Other schedule highlights include the Outlaws opening their home slate with a 2018 championship game rematch against the Dallas Rattlers on June 27. In what has become a league tradition, the Outlaws will also host their annual Fourth of July game. Typically, the largest regular season game of the year with crowds between 20,000-30,000, this year’s edition will feature a 2018 semi-final rematch against the Chesapeake Bayhawks.

“We had a fantastic season last year, and as we look at next year’s schedule we are looking forward to holding onto the Steinfeld Trophy in 2019,” said Mac Freeman, President of the Denver Outlaws and Senior Vice President of Business Development for the Denver Broncos. “In our first home game of the season we will face-off against Dallas, who I am sure will be out for revenge; but with home field advantage and the best fans in lacrosse behind us, we look forward to putting on a great show.”

The league partnered with GotPro, a sports software company, in creating this year’s schedule. This state-of-the-art scheduling software helped find the best slate of games given each teams’ specific needs.

“GotPro is pleased to have helped MLL on the 2019 season schedule,” said GotPro founder and president Gavin Owen-Thomas. “While we work with professional sports leagues from all around the globe, we were excited to enter into a partnership with MLL for the next three years. Our best-in-class software is now pairing with the best lacrosse has to offer. As lacrosse continues to grow, GotPro looks forward to bringing our tailor-made software products to lacrosse leagues and teams across the country.”

Major League Lacrosse (MLL), the premier professional outdoor lacrosse league, is headquartered in Boston. MLL has led the sport of lacrosse into the mainstream of competitive team sports since 2001. In the spring of 2018, MLL entered into new leadership for the first time in 17 years when it selected Alexander Brown as the Commissioner. The league is made up of nine teams: The Atlanta Blaze, Boston Cannons, Charlotte Hounds, Chesapeake Bayhawks, Dallas Rattlers, Denver Outlaws, Florida Launch, New York Lizards, and Ohio Machine.

GotPro is a sports software company who specializes in providing the most robust software for organizations to run their leagues, referees, players, etc. They provide powerful, tailor made software products to fit any league or organization’s needs all under one umbrella. Their clients include: Major League Soccer, United Soccer League, Major League Rugby, Chinese Basketball Association and Cricket Australia. 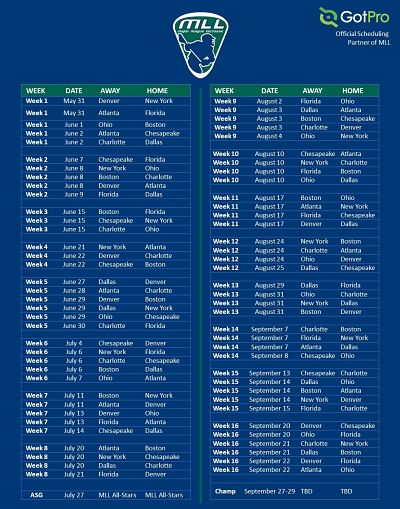