thanks to Paul Kabalin for the pictures!

(note: edited to account for an incorrect goal scorer)

Right after I saw the incredible STA win over SA, a game I thought would be my in-person game of the year, I got something just as good . . .

46:11 . . . That’s how long Cardinal Mooney controlled this game for.  It was the 3:13 after that that denied them their first Final Four appearance. The What-if’s this summer will be many and painful. 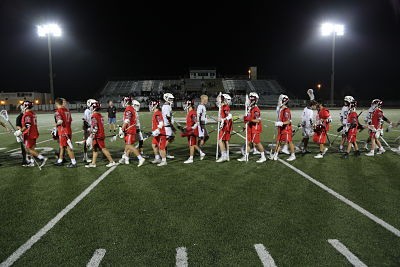 How many times have you heard on a TV broadcast an announcer pooh-pooh a late icing on the cake goal by saying ‘but it gives the trailing team a chance to win the faceoff’?  And 99.99% of the time that’s just a hollow warning as the leading team won the game anyhow . . . but last night was the 0.001 and it came up three cherries on the Jupiter slot machine.  What if instead of scoring CM, had decided to run out the clock?  All game long they made it almost impossible for Jupiter to take away the ball on defense.  A good possibility that they could have run out the clock or at least killed a lot of it.  Ironically, before the game I was talking to CM Head Coach Derek Wagner and he thought 12 goals could be the magic number and he might have well been right in retrospect.

High School sports can be cruel and capricious . . . and exhilarating and miraculous . . . all at the same time. 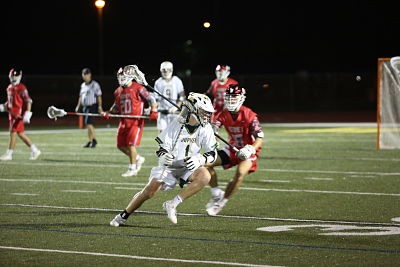 These two teams played a beautiful game of lacrosse to watch.  Sure, there were some bones to pick.  Jupiter’s shooting in the second half until those last few minutes kept them from getting closer, or even ahead, earlier.  A close faceoff battle in the first half turned against Cardinal Mooney in the second, although very few of the faceoffs all game long were clean wins.  Save percentages were not great on either side.

But these teams proved last night that they are elite teams, and both are VERY FUN to watch.  Unfortunately for Florida fans we’ll never again see an MJ McMahon to JP Jackson cross crease, back door score again.  Three more times last night probably pushes that over 1,000 if club play and middle school (heck, maybe even U-7 for all I know) are counted. 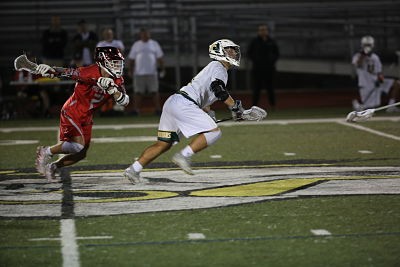 As for Jupiter it was another version of ‘next-up’ as Miles Jones (might want to change that ‘i’ to a ‘y’ Miles) stepping up again for the depleted Jupiter midfield, and none more important than his top left laser from distance to tie the game with 28 seconds left.  The attack of Tyler Douglass, Max Sanderson and Chris Radice combined for 6G/2A too.  Trevor Sousa added a hat-trick while CM got 5 goals out of Charlie Budreau and Ryan Katchen.

And in the end, it was Dylan Frankhouser’s OT faceoff win and Chris Radice’s clutch shot that come up as the fourth cherry in a row. 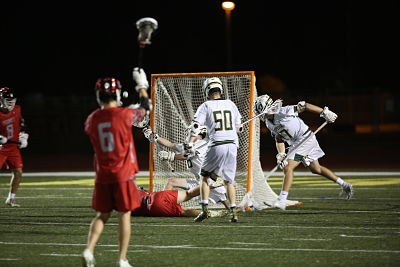 CM got off to the 1-0 start at 7:17 as McMahon found Jackson with version 1.0 of the crease feed, only to have Jupiter respond twice in 8 seconds for the 2-1 lead.  Sanderson found Jones alone in the middle off the right wing and the rip hit the top corner at 6:26 and then Frankhouser popped a faceoff forward and hit the net with the bounce shot from the right alley at 6:18.  McMahon tied it up at 2 with 3:01 left as he got under his defender from right GLE and finished with the left hand while falling in front.  CM then scored twice in the last 10 seconds of the 1st, with Budreau going down the right alley and converting with the high shot and with one tick left Alec Frank popped forward his own faceoff win and finished with the bounce shot to the top left for the 4-2 lead after one.

The first four minutes of the second started with some back and forth and a few turnovers but then we saw 5 goals in 2:02.  CM extended the lead to 5-2 at 8:04 as Katchen took McMahon’s skip pass from right wing on the top left and he stepped in before firing to the low left.  Jupiter responded twice in 33 seconds to cut it to 5-4, with Jones finishing off the fast break as JC Houchin found him streaking alone down the middle from the right wing for the left rip at 7:46 and at 7:13 it was Sousa dodging to the middle from the left wing, leaning in and scoring low while falling down. 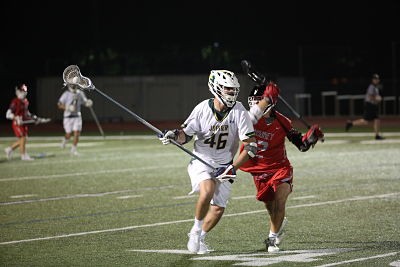 The teams rapidly swapped goals in 30 seconds right after that, with Katchen hitting top left on the right alley dodge and Jones again getting the step down from top right off the low right feed from Sanderson when the slide didn’t react, and it was 6-5 with 6:02 left.  Then with 3:43 to go it was McMahon-Jackson 2.0 and 24 seconds later on EMO McMahon took the Budreau feed from up top on the right wing and he walked in for the left-hand short side for 8-5.  At 1:08 CM took their biggest lead as it was McMahon-Jackson 3.0, only to have Douglass respond with 21 seconds in the half as he took a step left from up top to get off the left corner shot to make it 9-6 at the half.

At 10:54 it was Jupiter’s Sousa cutting the lead to 9-7 as he dodged from top left to the middle and hitting the top left corner.  CM responded twice to stretch it back to 4.  At 8:15 it was Jackson curling from behind right and placing the back hand shot high and at 4:56 it was Budreau also curling from right behind and hitting the top right corner for 11-7.  Sanderson cut it back to 3 at 4:16 as he worked the low right and his spin dodge left found net.  Then on EMO, at 1:07 it was Jones finding Sanderson on the low right from top right for the step down and we entered the 4th at 11-9. 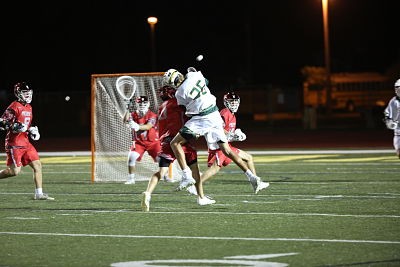 Another EMO got Jupiter back to one goal, at 9:19, as Douglass found Radice on the low left and Radice got off the shot with 2 defenders draped on him for 11-10.  The game went back and forth for awhile with the goalies making stops and with 3:49 to go CM’s Christian Laureano took the McMahon feed from behind on the right wing and his shot looked to go goalie-post-goalie-in the net, and when Budreau took the outlet pass and made his dash down the field at 1:49 to finish for the 13-10 lead it looked like that would be the insurance needed.

But just 7 seconds later it was Frankhouser popping the faceoff forward and finding Sousa on the left wing for the step down and 13-11.  Then Douglass utilized a spin dodge from left wing and hit the top right corner at 1:11 and with 28 seconds to go it was Jones taking the Douglass feed from top left on the top right side and launching the harpoon to the top left corner to give us the lacrosse version of suspended reality. 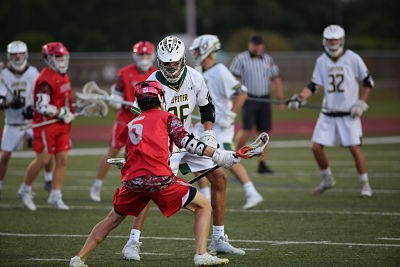 CM never got the ball back after the 1:49 mark of the 3rd.  And Radice placed the final dagger in CM’s wonderful season at 2:36 of OT, curling out from left and hitting the top corner to win it.

I have to say it again: High School sports can be cruel and capricious . . . and exhilarating and miraculous . . . all at the same time.

Jupiter is off to Boca Raton to face Ponte Vedra in the semifinals with Bishop Moore and St. Thomas Aquinas in the other matchup. 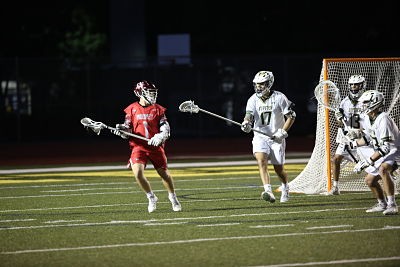 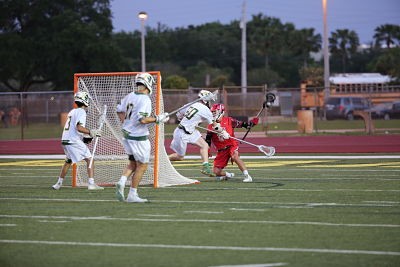 Max Sanderson and Tyler Douglass with 2G/2A each

Alec Frank and Christian Laureano with 1G each