King’s Academy has been thinking about this one for a while.  Last year’s regular season district game was an 16-2 wipeout and as King’s improved they got within 8-5 in the district final.  Last night’s game was one of those measuring stick games as a program and King’s was looking to cement their place at the same level that Oxbridge has called their own the last 4 years.  After the Tuesday OT loss at AH-Plantation the Lions were able to put that aside, although it took a half of play to do so.

HC Jacob Webb’s comment on the interview after the game about falling back into old habits in the first half is very telling.  Chasing the prize ahead of you is very difficult emotionally, learning how to win the big game is iterative.  Oxbridge HC Stan Ross knew that this game was going to be particularly tough given the past games between them as we talked about before and after the game.  It showed during the game in one big way as King’s was assessed 9 penalties, leading to 2 first half EMO goals and another one where the penalty had just expired.

Those in attendance know there was an incident in the stands late the game and I’ll comment on that in a separate column.  It did take away from what should have been a focused celebration of the school’s achievement.  For an achievement it was, as King’s overcame a 3-goal deficit by playing a terrific 2nd half defensively and taking advantage of the opportunities that were granted grudgingly by a stout Oxbridge defense.  The two teams combined put only 28 of 58 shots on the cage and a lot of that was having to shoot from outside with hands on sticks.  As the game went on the shooting for Oxbridge actually went down and they were not able to take advantage of a huge possession disparity in the 3rd and 4th.  And when they hit the cage King’s goalie Tommy Null came up big. 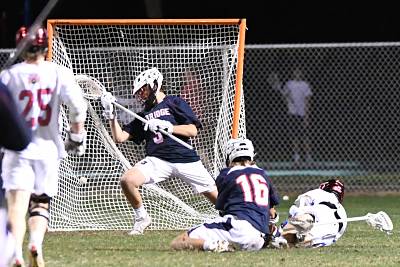 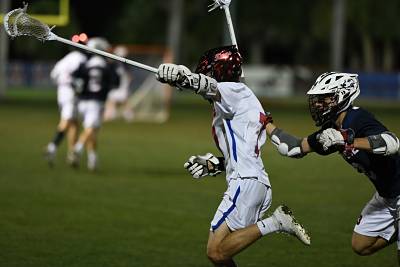 Oxbridge goalie Parker Fite played a very strong first half, frustrating King’s shooters in close.  But in the 4th the King’s offense got some fast breaks in transition and off failed clears and that was where KA pulled the game out.  King’s showed a balanced offense, as the 8 goals were scored by 6 different players.

Any way you look at it, the game was another great example of how the sport is evolving down here.  We’re trading in the athletic dominating shootouts for a more disciplined, traditional style of play that is featuring the growth in lacrosse IQ imparted by the influx of great coaching.  Let that pattern please continue! 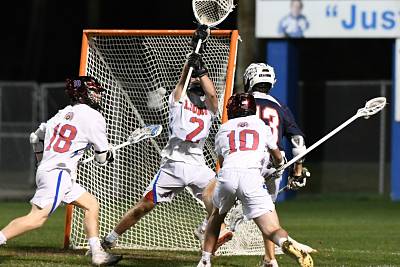 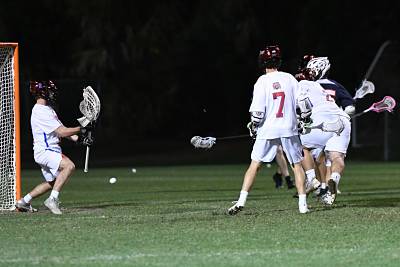 King’s took the early lead at 10:34 as Trace Hogan was given some walk-in space on the right wing and his bounce shot found the left side for 1-0.  Late in the 1st it was Oxbridge’s Reece Riccardo face dodging on the low right to the crease, finishing the high short side as a 2-minute unreleasable penalty had just finished to end the 1st at 1-1.

Hogan was assessed a stick penalty to start the second and the Thuderwolves took advantage twice on the EMO.  The first, at 11:03, by Riccardo, was basically a replica of his first goal and at 9:21 it was Gio Villasana finding Riccardo sneaking out from behind and the up top feed on the crease found him all alone for the 3-1 lead.  Oxbridge stretched that to 4-1 at 5:52 as they took advantage of an unwise decision behind the King’s net on a loose ball, setting up James Dorsey on the crease cut, fed by Riccardo from behind right, with Dorsey finishing behind the back.  34 seconds later it was Michael Smith getting one back as he worked from behind left, curled up the alley and hit the top right corner to end the half at 4-2. 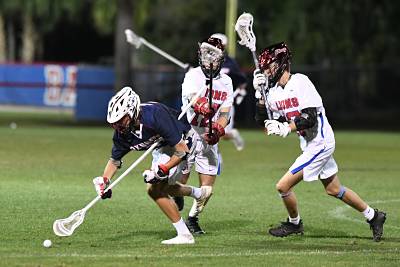 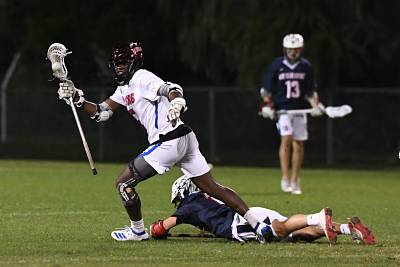 Two early goals by King’s tied it up at 4 in the first two minutes of the 3rd.  7 seconds in King’s took advantage of a faceoff popped forward and the fast break was finished with Aidan Aitken finding Brad Wharton on the low left for the low shot and then Aiden Collier tied it up as he slipped past the defense on the left wing for the low left hand shot at 10:01.  Oxbridge then shut down the King’s clears and spent much of the quarter working for long possessions but the shots missed the cage or hit pipes and the Lions weathered the storm, although there was definitely wear and tear as the quarter wore on.

The 4th was pretty much all King’s, even as they had to kill off the penalties.  Null stood tall and KA took the lead at 10:15 as Grant Kidwell took off down the right wing after an Oxbridge turnover, finding Aitken with the skip pass to the left wing for the open right hand high shot and 5-4.  After again killing off time, Aitken grabbed a loose ball off a defender’s slip near midfield and beat the defense to the goal for the low left shot and 6-4 with 5:51 left.  Smith then made it 7-4 with 4:06 left as he beat his defender way out left and got to the cage for the low shot, but King’s was called for unsportsmanlike after the goal, giving OA the man up.  Dorsey took advantage with 2:38 left as he face dodged to the low left and he beat Null high short side.  Chris Erneston finished the scoring off as he took Collier’s feed on the fast break to finish alone with 34 seconds to go. 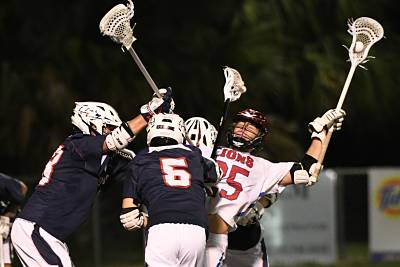 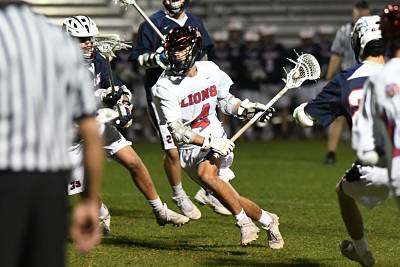 Trace Hogan, Brad Wharton and Chris Erneston with 1G each

Thanks to Coach Webb and Coach Ross for talking to me before and after the game.