Thanks to Ted Swoboda for the photographs and the Jupiter crew for the stats.

Editor’s Note:  Lee assigned me to write about this game since he wanted to attend the District 28 final.  Fine, but I apologize in advance to the District 24 faithful who have come to expect his insightful commentary.  In addition, it had been a while since I logged into our site so apologies again for the late post.  To ease the pain, below are  a few of Lee’s past words and FLN headlines to add a little color to what has to be the best lacrosse rivalry in the state.  A rivalry between a public and a private school, but more about that later.

A rivalry with former Division One players as coaches on both sides, with alums who have continued to play at some of the best academic and athletic colleges in the country and one whose games NEVER disappoint.  Friday was no different. 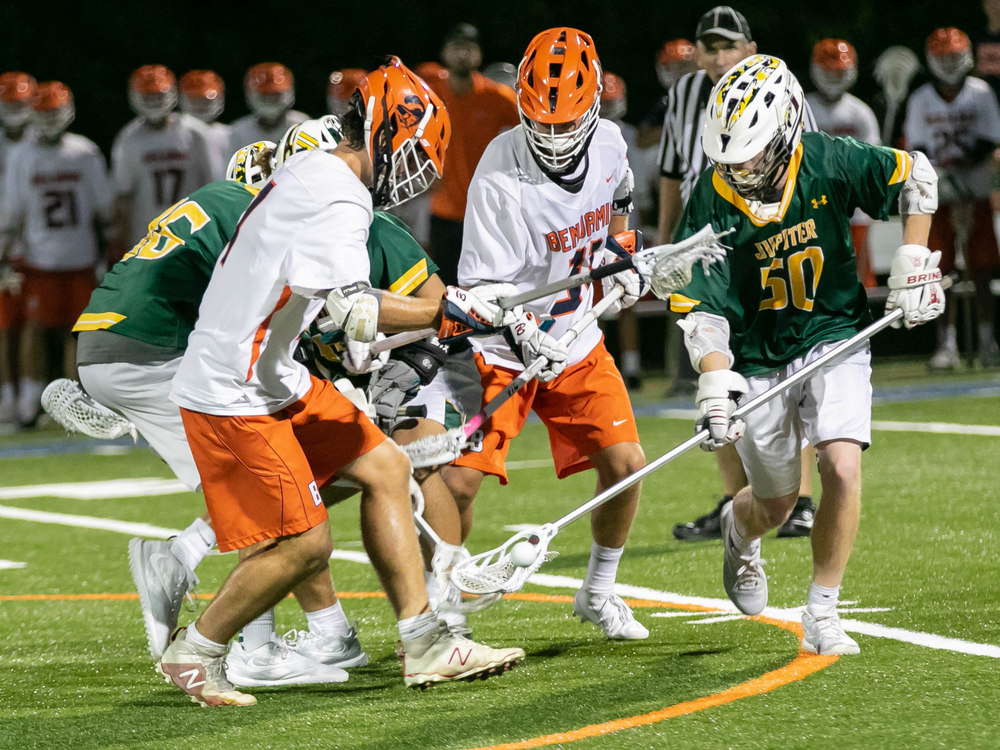 Jupiter and Benjamin, again.  It wasn’t long ago that Benjamin won the state club championship and a little news item announced the arrival of Dan Loftus and Nick O’Hara from Duke to coach the Jupiter Warriors.  Benjamin’s Peter Cordrey is no slouch, having played goalie at Princeton (his son has a bit of a big game Saturday against last year’s Ivy League Tournament Champions).

What a shame that the FHSAA does not have the ability to use a seeding system for it’s Boys Lacrosse Championship,  for this was a state final caliber game.  Before nearly 1,000 fans – take note local media – two of the Top 5 teams in the state met last Friday in a District Final…

It gets harder each year for me to come up with original adjectives for this game. #4 and #5 meeting in a district final AGAIN. I really need to come up with a good nickname for this rivalry.  Soccer uses the term Derby. 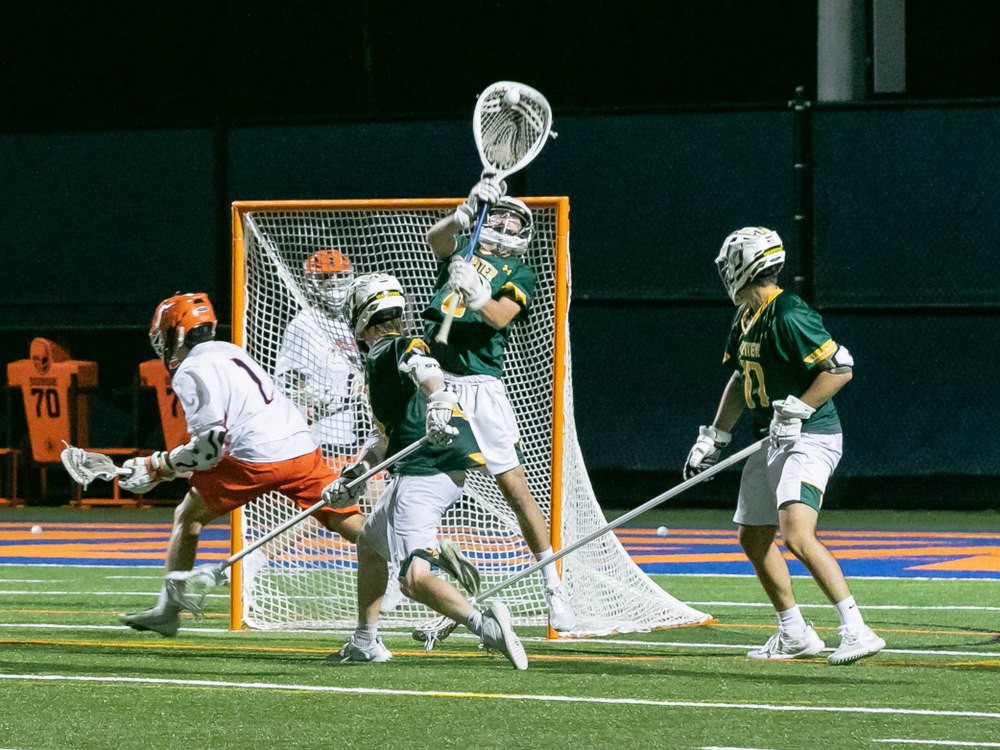 District 24 has consistently boasted of two Top 10 programs every year, and I can’t think of another district that can claim that.  You’d call it a cross-town rivalry or an English Derby but they technically are in two different cities even though they are probably only about 5 miles apart.  Last year it was Jupiter’s turn to wear the crown and they went a lot further than that, on to FHSAA glory.  In the previous three years it was Benjamin, going to a state semifinal and a state final.

It’s Jupiter’s Year, As They Take Down Benjamin 14-6

Jupiter Knocks Off FloridaLacrosseNews.com’s Final Four Pick! Benjamin is Out

As someone who normally watches a game through a lens, sitting in the stands was actually pretty fun.  There were, of course, the various fans who were obliged to help a very accomplished group of referees with the officiating.  Next to me were a couple of gentlemen who had forgotten more about the game (one won a Baltimore area championship in 1968 and later coached a college team) than most in the stands will ever know (that includes this writer).  These two came out to watch good lacrosse and were impressed.  They should have been.  Finally, there was the packed house, both in the stands and on the sideline who followed every score with a cheer which was Augustaish (that’s a golf reference and not really a word).

What was clear was the skill of all of the players.  Both defenses were exceptional, reflecting hours of practice and the tutelage of coaches who know just a little bit about that side of the field.  No goal came easily, and that’s no knock on the offensive players (note the most recent Super Bowl).

We were deprived of an epic faceoff match up with the injury to Benjamin’s Michael Lobosco keeping him out of the game.  Jupiter’s Dylan Frankhouser won every draw except one, probably the difference in this one goal battle.  Here’s Lee’s comments from March, 2018:

“Prefer a good faceoff battle?  Dylan Frankhouser and Michael Lobosco went at it 22 times and Dylan won two more . . . with one of those in the OT, after a 45 second scrum.”

Air Force and Navy, respectively, will enjoy this battle in the years to come and we will miss them.  And speaking of respect, the Jupiter assistant coaches were quick to praise Michael and note his absence.

For Jupiter, attackman Max Sanderson also missed the game, so neither team was at full strength.

What you will read next is the very shortened version of Lee’s normal description of the action.  His detailed “court reporter” skills are unique and as much as I like to rib Lee, I must admit he’s exceptional.  Try to write about a game sometime and submit it to us

Benjamin’s Blake Chami opens the scoring with an unassisted goal.  Junior AJ Levitt follows with a beautiful behind the back score (not showing off, it’s what he had to do from the right side of the cage) after a precision feed from Grant Bretzlaff to put the Bucs up 2-0.  With only 1:57 left in the first quarter, Riley Linden gets the Warriors on the board and the period ends 2-1, Bucs. 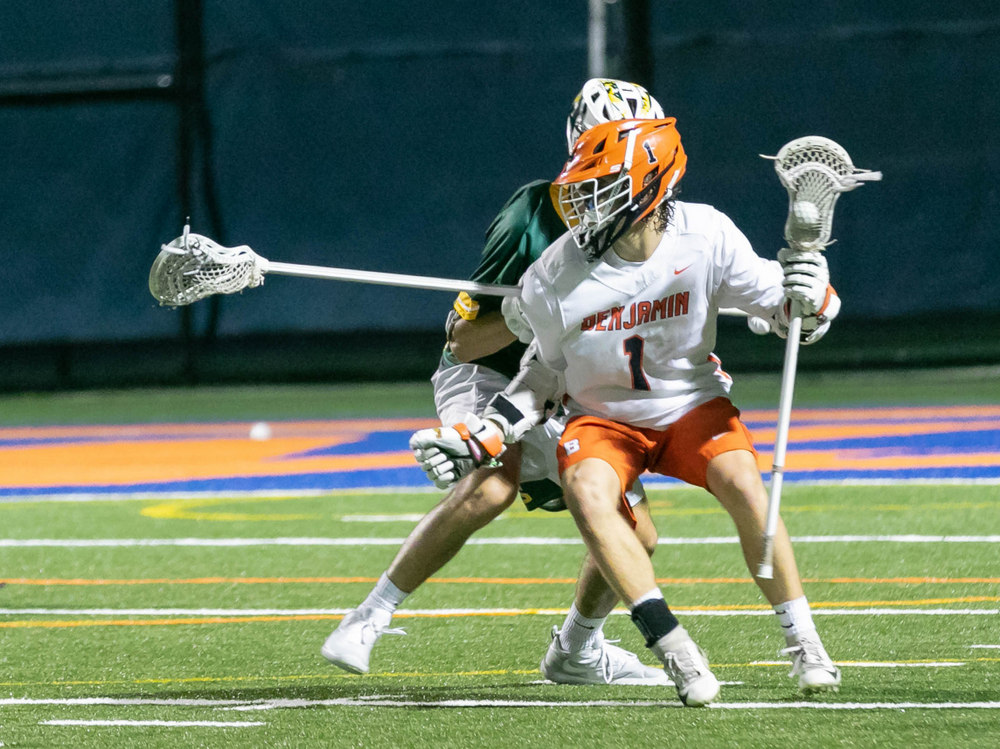 Levitt gets the scoring started in the second with a pretty left side dodge and righty rip from the outside to make it 3-1.  Keeping the Bucs on a roll, sophomore lefty attackman Trevor Natalie finishes a beautiful roll from behind the cage to run the lead to 4-1.  By the way, Trevor, you remind of three of my favorite players I’ve ever watched in Florida, Benjamin’s own Andrew Packer and St. Andrew’s Matt Adams and Matt Bellando (check them out – pretty good company).  I look forward to catching more great moments from you in the next two years.  Jupiter’s Miles Jones pots a goal down the middle assisted by Jackson Bashaw, cutting the deficit to 4-2 with 58.5 seconds left in the half. 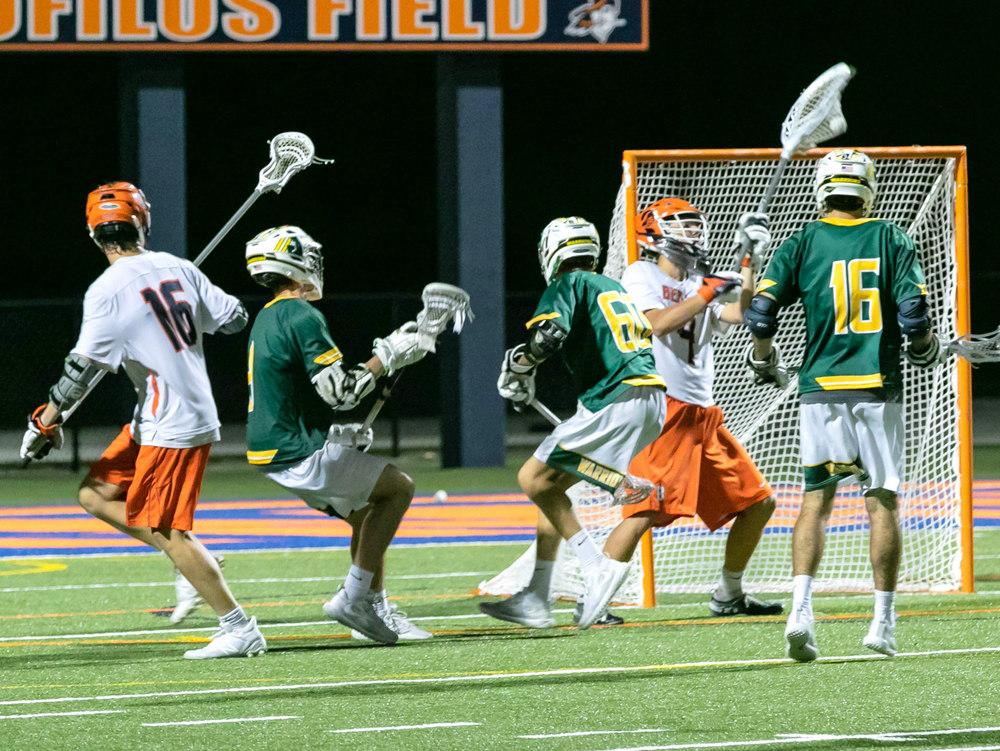 Jupiter’s Bashaw gets his first score on a feed from Jones to grab the Warriors’ first lead 6-5 at 9:11 in the 4th.  The Bucs bounce back on a Chase Farriss to Erik Sorensen score to tie the game at 6 with a man up goal 2-13 at 6:01.  Here I’d like to say how clean and well referreed this game was.  This was the only man up situation of the game and it was the only one our group of “experts” thought was worthy.  These young men (I’ll include the referees in that reference – you’re welcome) did themselves proud Friday night.

Tension in the air?  Incredible. Best damn district final in the state?  The title is intact.  And seriously, FHSAA, are you really thinking of splitting public and private schools and taking away such great competition?  There may be a day down the road, but we are nowhere close now and the option should be given to the schools to decide where they will compete.

I’ll toss in that Dylan Frankhouser won the ensuing faceoff.

A little more than three minutes later, Jupiter’s Trevor Sousa bolts from  X with a left handed goal to put the Warriors up 7-6 for good with 5:46 left in the game.

A heartbreaker for the Bucs, a thrilling win for the Warriors, and it could have easily gone the other way.

Jupiter hosts Vero’s St. Edward’s this Friday at 7:00pm the FHSAA regional quarterfinals and the full state bracket can be found here:

Face0ffs:  Dylan won all but 1