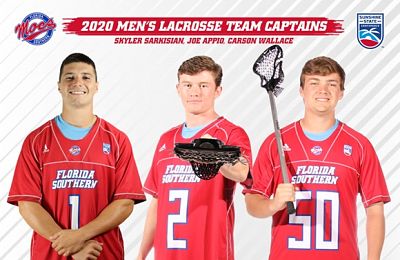 The captains were voted on by the members of the team, with input from the coaching staff.

“We are excited to have these men lead our program in the 2020 season,” said Ward, now about to start his tenth season at the helm of the program. “We are continually evolving and trying to develop men of the highest character in our program, both on and off the field, and these five men bring it every day.”

Appio was the team’s fourth leading scorer a year ago, with 23 goals and 21 assists for 44 points. For his career, he has recorded 32 goals and 35 assists, having played in 44 games. A true student-athlete, last year he earned academic recognition as a member of the Sunshine State Conference Commissioner’s Honor Roll and D2 ADA Academic Achievement Award, while also earning SSC Offensive Player of the Week award in April. Well rounded, he is a nominee for the prestigious national John Wooden Cup.

Sarkisian has played in 37 games over the past three seasons, making 17 starts. He really came into his own last season, collecting 52 ground balls while causing 22 turnovers. He also found his way into the offensive zone, scoring five goals while dishing out three assists.

Wallace had a breakout year in 2019, scoring 17 goals to go with four assists. In 36 career games, he has scored 32 goals and 4 assists for 36 points. Last season, he earned a spot on the SSC Commissioner’s Honor Roll.

As a true freshman in 2019, Atlas played in all 16 games, starting 15 times. He led the team in both assists (42) and total points (72), and was third in goals (30). He added 34 groundballs, and caused seven turnovers. Last season, he was named to the All-SSC Second Team, the SSC All-Freshmen Team, and the SSC Commissioner’s Honor Roll.

Connor played in 13 games last season, and collected eight ground balls. He managed to score three goals on the season, on six shots on goal. He earned a spot on the SSC Commissioner’s Honor Roll.

FSCMocs.com is the official website of the Florida Southern College Moccasins. Buy officially licensed gear in our online store. The Mocs can also be followed on Facebook, Instagram, and Twitter. Find out how to join one of our booster clubs and support nearly 500 student-athletes by clicking here. 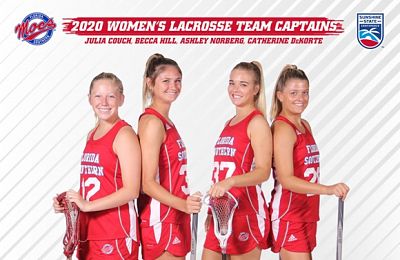 “These are four amazing student-athletes, all of which bring their own unique qualities and leadership styles to the position,” Reber said. “I am extremely excited for them to lead the team this year and keep the culture and success of our program on an upward climb.”

Couch, a senior attacker, played in 19 games a year ago, making eight starts. She took 42 shots on the year, resulting in 21 goals. Adding in her 11 assists, she finished the year with 32 points. Additionally, she caused four turnovers, and harnessed 18 ground balls.

DeKorte, a senior midfielder, started four times a year ago, while playing in 19 of the team’s 20 games. In just 26 shots on goal, she scored 18 goals, including nine free position tallies. She collected 13 groundballs and caused two turnovers.

Hill, a senior defender, started 17 times in 2019, while playing in 19 games. She was part of a defense that allowed just 8.25 goals per game. A hard worker on defense, she managed to score once last season. Her 35 ground balls were second on the team last year, and the most among all returning players. Her 17 caused turnovers tied for the second-most on the team as well.

Norberg, a senior attacker, played in 16 games last season, making one start. She finished the year with 13 goals and seven assists, for 20 points. She gathered up 11 groundballs.

Reber continued, “I have a tremendous amount of faith and trust that they have a team-first mentality and will be the right individuals for what our program needs this season.”

The Mocs finished the 2019 season ranked No. 8 in the final IWLCA Division II Coaches Poll, with a final record of 16-4 and an appearance in the NCAA Regional Semifinals. The program will open the 2020 season on Friday, February 14, at Young Harris.

FSCMocs.com is the official website of the Florida Southern College Moccasins. Buy officially licensed gear in our online store. The Mocs can also be followed on Facebook, Instagram, and Twitter. Find out how to join one of our booster clubs and support nearly 500 student-athletes by clicking here.