For those who followed us last year you know I don’t cover a big loss the same way as a close game.  Coming into the season, based on my knowledge at the time, I ranked Western in my Top 15.  Since then the team lost its’ best defender, Captain Danny Panchookian to season ending surgery and in the last few days Alec Marinelli underwent emergency surgery for injuries sustained in a fire, which might well threaten his future playing ability.  That’s a lot of emotion for kids to process and it showed last night.

Marinelli was in surgery during the game last night and the lacrosse community wishes you the best in your recovery.  Should we get further information we’ll pass it along via Twitter.

Calvary Christian was an ‘Also Considered’ in the Class 1A Top 15 and they did nothing to make it easy to keep them out, but it will be hard to fully know how good they are for a few weeks as the schedule doesn’t really pick up until then.  Winning the District will be quite an achievement given they are in with #3 AH-Plantation and another ‘Also Considered’ in Pine Crest, who they lost out to in their old district final last year. 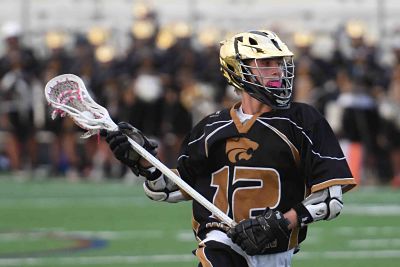 The game itself was an indication of where Western is going to focus this year, as they were young without the injuries, and somehow got younger.  There were some definite bright spots, as both their goalies, Zach Lewis and Ethan Streiner, had solid efforts since CC was able to get inside fairly easily.  They combined to make 16 saves, with many on the doorstep.  Some nice outlet passing too.  It was a pretty good struggle at the faceoff dot too.  Fast breaks were crisp.  Donnie Kitchen is a senior attacker and captain and he’ll gain some very valuable life expeience this year in a leadership role.  There will be better days but without the two key players it will be a transition year.  Coach Doug Shanahan has gone that route before and we’ll circle back to them later in the season to see how they progress.  It was going to be a tough road with #4 St. Thomas in their district.

Calvary showed a very good Top 6 on attack/midfield and they play well together.  It’s an interesting blend of dodging, passing, off-ball movement and shooting.  They are one of the better off-ball teams I’ve seen for awhile and it’s not easy to game plan for it.  Senior Jason Thomfohrde (where do the years go? Seems like yesterday I was writing about him as a 5′ tall 8th grader . . . ) is a difference maker when the team needs a goal and has an interesting way of playing.  He looks easy to hit when ball carrying but has a 6th sense for contact that lets him avoid the big hit and slip into open space.  His style reminds me of an Amoeba and he has a similar motion on the field, getting open looks with that ability to adapt his body position quickly. 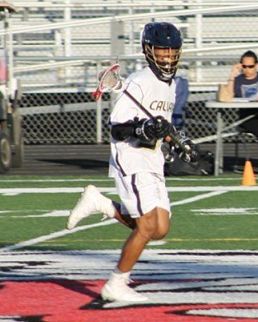 He’s hardly a one-man team either.  The offense can highlight multiple two-man packages and the players seem to be able to fill roles seamlessly.  Jacob Tralongo was effective in playing off Thomfohrde and Luke Davis and Noah Horne also played that way.

And one other difference maker is Senior Nelson Telemanco, an LSM with high-end stick skills and speed, who picked up 3 goals himself on lengthy dashes.  A step-down, a swim dodge and an alley dodge.  You can’t sit on him, he’ll make you pay.

Hard to judge the goaltending since they only faced 12 shots on goal.  Eric Stephenson is a senior FOGO and very good at it.

Two excellent coaching staffs (some of my favorite people in the sport down here) and a beautiful night for a game.  I hope we see big crowds there all season long.

Cooper Coffin and Aaron Ridenour with 1G each

Thanks to Coach Bond and Coach Shanahan for talking to me before and after the game and thanks to the CC community for the slice of pizza too!