Former Heavyweight Champ Mike Tyson once famously said ‘everyone has a plan until they get punched in the mouth’.

Oxbridge got punched in the mouth last night and didn’t find a way to get back into it.  There was a hint  in their District final leading into last night.  18-2 over King’s in the regular season and 8-5 in the rematch.  And the stats from that game showed both goalies made 10 saves.  Canary in a coal mine.  Add in the last regular season game and how that ended.

Regular season in Boca showed a 7-goal win by the Thunderwolves.

A 14-goal reversal last night.  That doesn’t happen in a vacuum.  Probably SA’s lowest moment and Oxbridge’s highest back then in the regular season.  Completely different story last night. 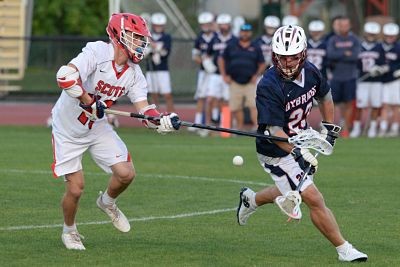 Two reasons.  First, and foremost, SA played a terrific all-around game.  Defensively they made life difficult for Oxbridge’s offense to get into their offensive patterns.  Shots were blocked, and when Oxbridge finally got some open looks, they missed the net.  33 attempts at goal and only 16 hit the cage.  And when they did hit the net, freshman goalie Gunnar Schwarz was there.  Shades of two years ago when Christian Tomei stepped up in that playoff epic.

Some of that was Oxbridge’s fault but more of it was how SA cut down time and space.  It’s said lacrosse has been a combo of hockey and basketball but in truth, the offense has trending towards basketball far more and the defense has trended towards hockey.  Time and space is a concept in hockey on defense and it means you don’t leave much room between the player with the puck and their defender and you don’t give them time to think about what they want to do.

And that clearly defined what SA’s defense did to Oxbridge last night. 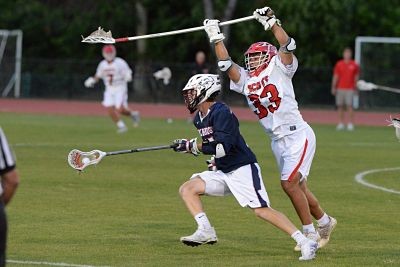 Another thing that happened is that SA’s offense and midfield did not turn the ball over much and that took away one of Oxbridge’s calling cards this year, quick transitions to fast breaks that took advantage of their defensive qualities.  I counted only ONE fast break odd-man attempt in the 1st 3 quarters and that one ended with a wide-open look that missed the cage.  And I don’t remember one instance of Oxbridge’s off-ball wing picks effectively setting up an open look.  SA took away pretty much everything Oxbridge did all year.

Then there was the other big change from the regular season; SA’s offense has figured it out over the season.  Last year’s Final Four team relied on a full six-man package and the pieces fit together very well in the roles assigned and with last year’s graduations it took time to get back to finding that balance.  And it did last night.  EIGHT different goal scorers and 7 assists on the 12 goals.

This rivalry has shown some of the most amazing role reversals over the past 3 years.  Oxbridge’s rise to become a top echelon program.  Saint Andrew’s rise, fall and rise again.  Regular season win = playoff loss . . . each of the 3 years.  Their own epic mini-series.  And every year in the first round of the brackets instead of the Final Four, where it belonged.  Are you listening FHSAA?  This gifted Oxbridge senior class goes out unfulfilled . . . under a system of not seeding quadrants or including at-large bids to non-District winners . . . someone, or multiple someone’s, fill that role every year.  Such a simple thing to fix. 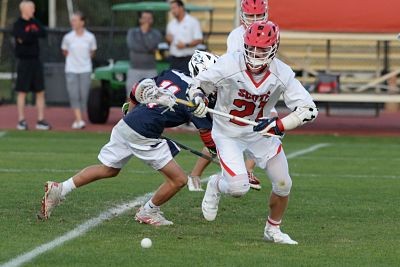 SA jumped out early with 2 goals in the first.  Matt Adams worked right GLE and got under his defender to score from the low right crease at 9:42 and that was followed by Michael Lizzio finding Max Schwarz cutting from behind the right side of the net and the pass gave Schwarz the all alone shot in front at 8:37 for the 2-0 lead.

Less than a minute into the second it was Adams finding Anthony Borodiak from behind left on the top left for a bounce shot that went high right for 3-0.  With 6:12 remaining it was Adams finding Schwarz cutting down the left alley and his behind left pass gave Schwarz the left hand low right corner shot for 4-0.  Lizzio took it to 5-0 at 3:54 as his right alley dodge caught the low left corner and at 2:20 it was Ryan Norman taking the Harrison Konsker feed all alone in the middle from right wing, finishing low for 6-0.  Oxbridge finally got on the board with 31 seconds left on Reece Riccardo’s right wing split dodge to the lower right, finishing with the left hand low to end it t\at the half with SA up 6-1. 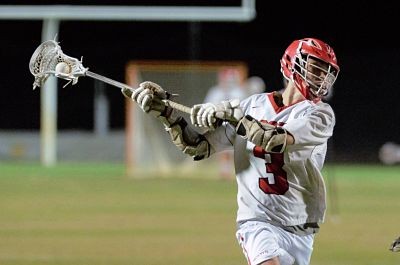 Oxbridge showed some life early in the third as James Dorsey scooted through the defense to the middle and firred low to high from 10 yards for 6-2 at 9:19.  OA won the next faceoff and pressured but were turned away and that pretty much was the last grasp they exhibited.  Konsker made it 7-2 at 7:09 with the left wing face dodge and right hand low, followed at 4:37 on Reid Malkin’s one-timer finish of the Adams’ feed in front as the OA defender got caught in the net.  Riccardo got one back at 3:19 on a delayed call, as he worked hard on the low right wing before getting free for the high shot and 8-3 but Borodiak answered quickly 23 seconds late on a solo dash from far out on the right wing, beating the defense to goal for the finish.  Schwarz finished off the period at 1:30 as he took the Anthony Molle feed from left GLE for the high bounce shot and a 10-3 SA lead.

OA scored the first in the 4th just 13 seconds in as Riccardo found Ryan Conforti cutting the middle and his right wing feed let Conforti fire to the top left for 10-4.  Konsker answered at 9:58 with a step down on the right wing off of the right GLE Adams feed for 11-4 and 90 seconds later Nick Yi got into the act by scooping the loose ball on low left and hitting the bottom right for 12-4.  Riccardo finished off the scoring at 5:04 as he took the Jack Kilian feed on the only converted fast break of the game for the Thunderwolves. 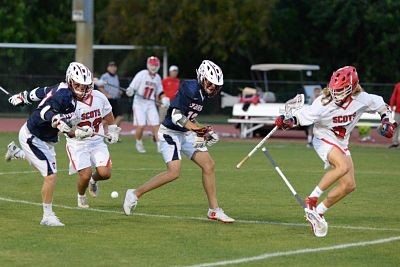 The first round.  A graveyard in this area.  Always has to claim a victim.

Are you listening Gainesville?

And now on to either St. Thomas or Pine Crest for round two for the Scots.  2012 seems like a long time ago now . . . but doesn’t the Bible say something like 7 bountiful years and 7 lean ones?  SA fans are hoping for only 6 of the latter . . .

As I like to do after each round, thank you to all the graduating kids who’ve played their last games, and good luck to those going on to play in college!  To the parents who’ve been there the whole time, thank you for your time and efforts . . . and readership too . . . we all appreciate what you’ve provided for all of us. 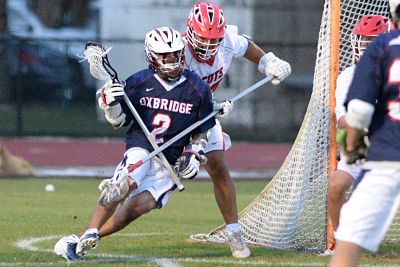 Ryan Norman, Reid Malkin and Nick Yi with 1G each

Ryan Conforti and James Dorsey with 1G each